Share your Kobe cards here. Not for sale just for sharing and appreciating the greatness! NO cards to share, just a sig I made.

I forgot about the other ones,so put them all together. I'm still stunned about the news...... I have to say I hated seeing him destroy the Suns in the playoffs in the mid/late 2000's but he was one of the greatest players ever to lace them up and you respected him for the way he played the game.

The 81 Point Game, the Championships, the 60 point final game.......so many great basketball memories.

The more the years went on the more you grew to understood how great a player he was!

One of the all time greats! Been so weird watching the NBA without any of these guys this year, but it's crazy to think that one of them is no longer with us so soon 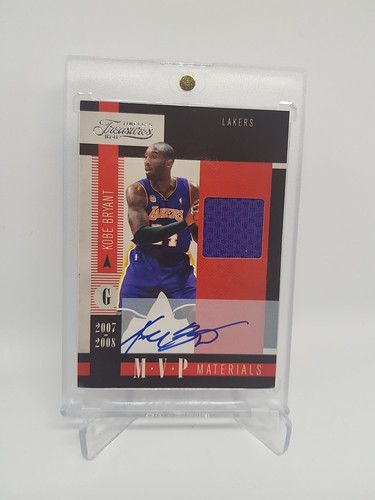 R.I.P to one of the finest ever Once I got this Many moons ago I stopped hunting for a card. My one and only Kobe Auto hit in a break numbered /25, RIP Kobe & Gianna 😔 RIP Kobe Bryant aka “black mamba”.
A true superstar of the game. You have brought so much viewing joys to so many. You will be sadly missed 😞✌👊 As a father of a young girl it really made me upset. Was never a Kobe follower as I am a late 80's early 90's ball head, but I have always like Kobe and admired what he can do.

He didnt even get to see himself inducted into the HOF dont have many, but one just happens to be a 1/1

I only have a couple which are with the big man himself, My only card of the great man, sad day for all

Biggest honour the NBA could give would be to change the logo right? That would be epic. Do you think they would ever change it or would it be too insulting to Jerry West? I think I've heard an interview with him where he said he wasn't sure why they picked him? I think that’s a little to much. Maybe retire his jersey number/s with the whole league 👏🏻

GarnettFan4Life said:
Biggest honour the NBA could give would be to change the logo right? That would be epic. Do you think they would ever change it or would it be too insulting to Jerry West? I think I've heard an interview with him where he said he wasn't sure why they picked him?

I read someone's post I think on Blowout on the subject and they raised a good point that with his previous "out of court settlement" and the way the world is now that the NBA wouldn't do it because of the negative image.
Personally though I'd love to see it. There isn't a lot of people that'd remember Jerry playing but everyone sure knows who Kobe is.
Also glad to see that he will be straight into the HOF with no vote needed
You must log in or register to reply here.
Share:
Facebook Twitter Reddit Pinterest Tumblr WhatsApp Email Link